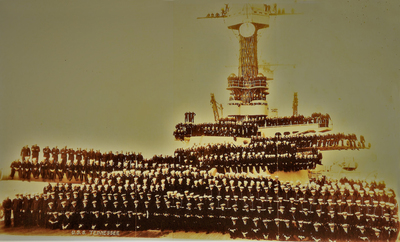 USS Tennessee was moored in Battleship Row when the Japanese attacked Pearl Harbor on 7 December 1941, which brought the United States into World War II. She was not seriously damaged, and after being repaired she operated off the West Coast of the US in 1942. In 1943, Tennessee and many of the older battleships were thoroughly rebuilt to prepare them for operations in the Pacific War, and in June–August, she took part in the Aleutian Islands Campaign, providing gunfire support to troops fighting to retake the islands. The Gilbert and Marshall Islands campaign followed from November 1943 to February 1944, including the Battles of Tarawa, Kwajalein, and Eniwetok. In March, she raided Kavieng to distract Japanese forces during the landing on Emirau, and from June through September, she fought in the Mariana and Palau Islands campaign, bombarding Japanese forces during the Battles of Saipan, Guam, Tinian, and Anguar.