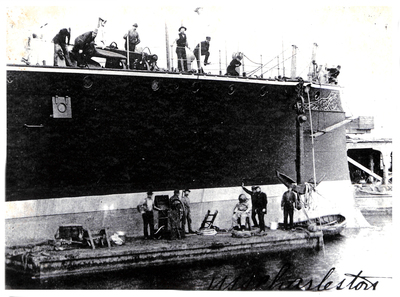 On the day of America's entry into World War I on 6 April 1917, Charleston was placed in full commission, and early in May reported for duty with the Patrol Force in the Caribbean. Based on St. Thomas, U.S. Virgin Islands, she patrolled for commerce raiders through the month of May, then sailed north carrying Marines from Haiti to Philadelphia.

Here she readied to join the escort of the convoy carrying the first troops of the American Expeditionary Force to France, which cleared New York on 14 June, made St. Nazaire, France, after a safe passage through submarine waters on 28 June, and returned to New York on 19 July. After training naval volunteers and reserves for two weeks at Newport, Charleston cleared on 16 August for Havana, Cuba, where she supervised the sailing in tow of several former German ships to New Orleans. She next escorted a convoy from Cristobal to Bermuda, where she rendezvoused with a group of British transports, guarding their passage to Hampton Roads.

In September–October 1918, she made two convoy escort voyages to Nova Scotia, then joined the Cruiser and Transport Force, with which she made five voyages to France carrying occupation troops overseas and returning with combat veterans. (Wikipedia)